Beginning in 2019 there will be a new MLS postseason format, according to a league announcement today.

There are a number of changes coming as part of the restructure, the most significant of which is the adoption of single-elimination throughout the entirety of the now straight bracket tournament.

Major League Soccer had a bevy of other concerns that they tried to address with the new format as well.

Major League Soccer is among the few domestic leagues in world soccer that plays their entire season in the same calendar year. Historically, FIFA’s international windows were scheduled in sync with the European domestic league’s schedules. As the MLS plays on through those windows, the conflicts wreak havoc on rosters, with teams missing their best players for weeks on end.

The new format will see the conclusion of the regular season in the first week of October with a three week break before the Audi MLS Cup Playoffs kick off, allowing for players to represent their country without a disruption to the competition. The single-elimination tournament would then commence with a three-week sprint to crown a champion.

In an attempt to place more value on the grind of accumulating points during the regular season, the new MLS postseason format rewards higher-seeded teams with a greater home-field advantage through the playoffs.

According to the data, about 67% of higher seeded teams have won single-game elimination matches in MLS Cup history. In the history of two-game series that number is closer to 50-50.

Perhaps more significantly, the restructuring grants a first round bye to the top seed in each conference. The number one team in each conference goes straight to the Conference Semi-finals and awaits the winner of the knockout rounds.

Apart from just freeing up players for the international break, the new MLS postseason format also allows for greater recovery time between the end of the regular season and the start of the playoffs.

For players AND organizations.

To be sure, the bulk of playoff participants aren’t involved in international duty and will appreciate the rest to gear up for the single-elimination tournament. However, the league is also interested in proving clubs a chance to promote and sell tickets for their tournament games.

Once the tournament begins, every team is will have a minimum of three days rest between matches, and a week in the lead up to the MLS Cup.

With the tournament concluding early in November, Major League Soccer hopes to avoid most of the inclement weather that has plagued Cups gone by. After doing a study of the league’s cold-weather cities, they determined that the difference in game time temperature between the old playoff timeframe and the new one is anywhere from 10 to 17 degrees.

The next World Cup is going to kick off on November 21, 2022, in Qatar. You read that right. And it’s been on every commissioner’s mind since the preposterous (and shady) decision was made in 2010 to hold a summer competition in one of the hottest places on Earth. A tiny country with littler history of soccer, and no stadiums, and tons of disposable cash…

The league has decided to get ahead of the situation with the new MLS postseason format. Under the new set up, a new Cup champion will be crowned before the 2022 World Cup is underway.

As the league continues to expand, so must the playoffs. The new MLS postseason format increases the number of qualifying teams from 12 to 14. This allows for the league to maintain a similar percentage of teams making the playoffs as other American sports leagues. 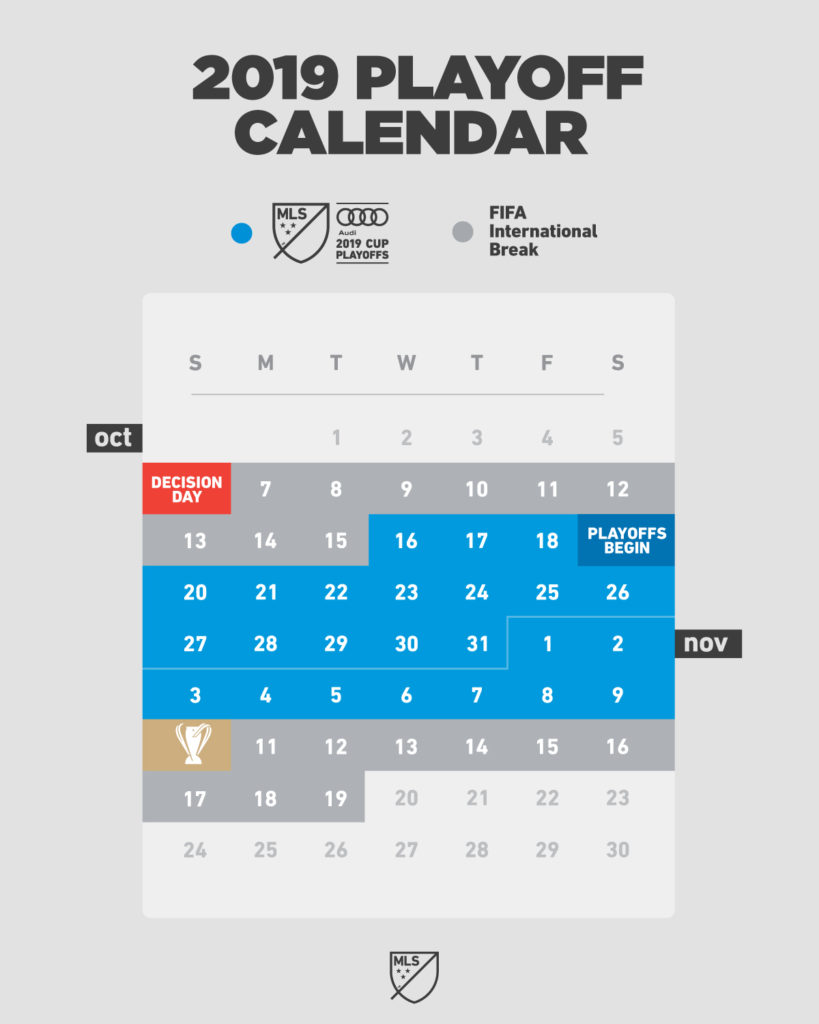 The 2019 Major League Soccer season kicks off on March 2nd. The playoffs begin on October 19th and the MLS Cup will be played on November 10th.