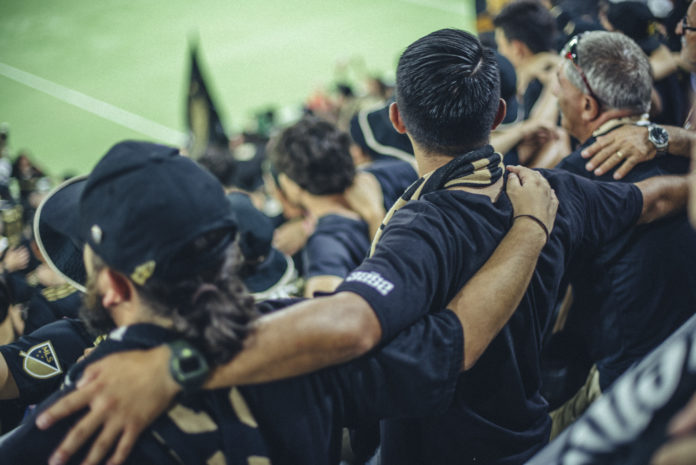 The 2020 LAFC preseason schedule was announced today. The club is entering its third year as a member of Major League Soccer.

Given the success of their first two campaigns in the league, the 2020 LAFC preseason schedule is particularly exciting. The club qualified for the 2020 CONCACAF Champions League, and their first appearance in that competition will be in advance of the LAFC home opener on Sunday, March 1st, against the newest expansion side Inter Miami CF .

(Did you know that’s David Beckham’s club?  It is. Just thought maybe you didn’t hear. That it’s his. David Beckham owns Inter Miami.)

The 2020 LAFC preseason schedule begins with training on Monday, January 13, at the Performance Center at Cal State Los Angeles.

The 2020 LAFC preseason exhibition matches all take place in Los Angeles at the Banc of California Stadium. The Champions League matches, of course, will take place alternatively in Mexico and Los Angeles as part of the home and away aggregate nature of the competition.

The first exhibition match on the 2020 LAFC preseason schedule is against Club Atletico Penarol, only the club’s third ever international friendly, on Saturday, January 25. LAFC then welcome New York City FC on Friday, January 31, before welcoming FC Dallas to the Banc on February 6th.

LAFC close out their exhibition slate with a match up against Toronto FC on Wednesday, February 12, before heading to Mexico to take on Club Leon.

The 2020 preseason schedule only includes two games that are open to the public. The friendlies against Penarol and Toronto FC can be attended by fans. Tickets can be purchased on the LAFC site.

The most exciting part of the 2020 LAFC preseason schedule begins on Tuesday, February 18 at 7pm PST. LAFC travel to Estadio Leon to play Club Leon in the first leg of the Round of 16 of the Champions League. Sorry — the 2020 Scotiabank CONCACAF Champions League. Nine days later LAFC host the second leg against the Liga MX side on Thursday, February 27th, at Banc of California Stadium. Tickets for the second leg can be purchased at lafc.com as well.

Just before the end of the 2019, LAFC announced the 34 game schedule for the regular season of the club’s third campaign in Major League Soccer. LAFC will be hosting the first three matches of the season at Banc of California Stadium.

As previously stated, Inter Miami CF (for serious, though, David Beckham is one of the owners) will play their first match in the league in the heart of Los Angeles. The Philadelphia Union will then try to take down the Western Conference Finalists. One week later,  LAFC blood rivals the Portland Timbers travel down the West Coast for what will certainly be a charged atmosphere.

Can I Kick It? LAFC adidas Original Samba to Be Released August 22

That thing you heard about MLS MVP Carlos Vela opting out of the MLS is Back Tournament in Orlando? It’s devastatingly true. Though the news...
Read more
News
00:02:14

LAFC Schedule for MLS is Back Tournament Announced

The LAFC schedule for MLS is Back has been announced along with all of the other dates, times and fixtures. Additionally, the details for...
Read more
News
00:01:48

GOAL! MLS is Back Tournament Kicks Off July 8

Major League Soccer announced the MLS is Back Tournament today, their plan to resume the 2020 season. All 26 clubs will be competing at...
Read more
News

MLS Announces Return of Individual Player Workouts for May 6